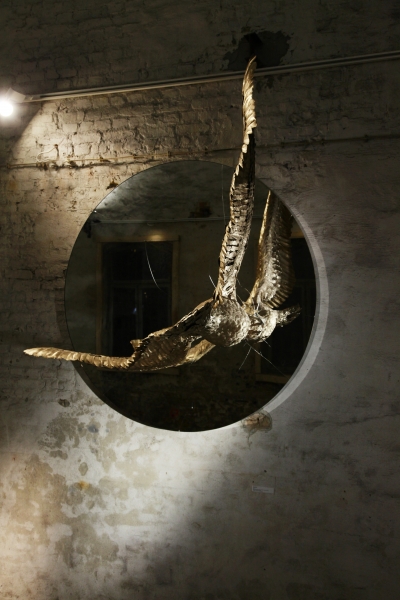 Conceived by a free spirit that doesn’t need categories. Fiona Bennett reinvents interior design – just recently the „flush“ at Berlin’s Wintergarten Varieté (with Hans-Joachim Böhme) – , creates costumes for theatre and film and is a successful businesswoman and member of the “International Women’s Forum“. Her creation “Nosedive“ was shown at the VON BARTHA-gallery in Basel, it was party of the 2016 exhibition „Surrealism & Beyond“ at the Boljmans van Beuningen-Museum in Rotterdam and is currently on display at Galerie Alexander Ochs. “Nosedive II“ – created by Fiona Bennett specifically for Berlin’s Kornversuchsspeicher – is a departure from familiar terrain. It connects mental labour to the room and the room to the spectator and displays a mirror image as multi-faceted as the person reflected in it.

The object was shown as part of the group exhibition „Wonderland II“ at Kornversuchsspeicher from April through July 2018.

This website uses cookies to improve your experience while you navigate through the website. Out of these cookies, the cookies that are categorized as necessary are stored on your browser as they are essential for the working of basic functionalities of the website. We also use third-party cookies that help us analyze and understand how you use this website. These cookies will be stored in your browser only with your consent. You also have the option to opt-out of these cookies. But opting out of some of these cookies may have an effect on your browsing experience.
Necessary immer aktiv
Necessary cookies are absolutely essential for the website to function properly. This category only includes cookies that ensures basic functionalities and security features of the website. These cookies do not store any personal information.
Non-necessary
Any cookies that may not be particularly necessary for the website to function and is used specifically to collect user personal data via analytics, ads, other embedded contents are termed as non-necessary cookies. It is mandatory to procure user consent prior to running these cookies on your website.
SPEICHERN & AKZEPTIEREN